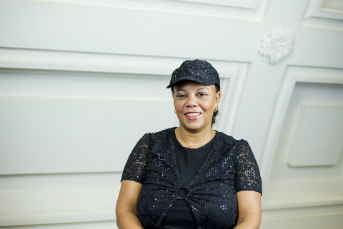 My name is Alisia. I’m 54 years old, and I’m a wife and mother of two beautiful girls.  I was diagnosed in 2008 with essential thrombocythaemia.

Emotions of diagnosis
Apart from a number of recurrent miscarriages, up until that point I had generally been fit and healthy and it was only through trying to donate blood that my high platelet count was picked up.

Like most MPN patients, before the final diagnosis was confirmed as ET, I remember waiting anxiously to find out if my condition was due to an underlying cause, like an undiagnosed cancer or which of the three MPNs it was going to be.  I had loads of confusing print outs from the internet and felt very concerned as to what the short-term and long-term prognosis was going to be for me.

I remember being anxious that I’d immediately have a stroke or DVT and had visions of my young daughters pushing me around in a clunky wheelchair with me dribbling onto ‘easy’ clothes, probably a shell-suit style affair, as the lack of exercise would mean that was the only thing that would fit!!, (not that I’m vain).

For a while it seemed that everywhere I went there were ‘youngish’ people in wheelchairs with sympathetic families fussing over the occupants – a bit like when I was recovering from the pregnancy losses, there were always babies being born on TV soaps or very pregnant people at work….. in bus queues or the supermarket – it was an awful time and very difficult not to let my imagination run away with me.

Faith sustained me
Fortunately two things were in my favour during the waiting time:
Firstly my faith as a Christian, (more of which later) and secondly I had private health cover which meant that I was referred to a specialist haematologist very quickly.  From initial GP referral, consultation through to tests, the results and diagnosis took less than 2 weeks.  It still felt like an eternity, dampening down those wheelchair images and trying to stop myself from re-reading the wide array of internet statistics about leukaemia, shortened life expectancy and all the other gloomy and pessimistic possibilities related to the MPNs.  But I know that for some MPN patients it takes much longer and I’m eternally grateful that it was only 2 weeks.

Back to my faith: I remember that I was not afraid of dying, heaven sounds great! However I was sad to think how that would affect my two young daughters at a crucial time in their childhood development.  I prayed and had a lot of prayer support from my church and Christian friends which gave me a great deal of courage and optimism.  I vividly remember having the bone marrow biopsy and being prepared for some pain or discomfort.  In fact I never felt anything, much to the amazement of the consultant – I do know that I was being prayed for by a lot of people at the time leading up to and during the test and I had also been praying for courage – it definitely worked!

Reassuring consultant
Once the diagnosis of ET had been made I felt relieved that at least I could start a medical regimen, adding hydroxycarbamide to the daily low dose aspirin I had started when the high platelet count had been confirmed.  Again I was concerned about the ‘information’ I’d seen on the internet about hydroxycarbamide – leukaemia risks, hair loss, nausea, skin problems…but accepted that because my platelets were just under 3000 at the time of diagnosis my consultant’s advice that I would have to take some medication was the right advice for that time.

Looking back I know that I was very fortunate that my consultant was experienced in MPNs, very reassuring, and took time to explain the various aspects of the MPN spectrum as well as the medication options with potential side effects and outcomes.

NHS a different experience
Once the diagnosis was confirmed my private health cover did not cover chronic diseases such as MPNs and I was slotted back into the local NHS haematology department; not to be overly critical, my experience there was very different.  I know that MPNs are rare disorders but I definitely felt that there was less understanding or an inclination to discuss the emotional aspects of the condition.  For example there was no attempt or opportunity to discuss the decision to double my hydroxycarbamide dosage even though my platelet levels had reduced significantly.  At that time, four months into my treatment I was still coming to terms with my concerns and worries about the long term effects of what is in reality a chemotherapy toxin – I resisted the advice to increase the dose, negotiating a bit more time to see if the platelets continued to reduce on the current level but I left that appointment unhappy, confused and feeling a little out of control of my own body.

Help from a buddy
I continued to scour the Internet for information about my condition and found the MPN Support website reassuring and balanced in the information that it offered. Through that website I managed to speak to a buddy who helped me decide that I would be more confident being seen by a specialist MPN unit, which was facilitated by my very understanding GP.  I now attend appointments approximately 8 weekly in a specialist MPN clinic which suits me, even though it involves a longer journey.  I feel much more confident and able to discuss medication changes with consultants who deal with MPN patients every week rather than once in a while.

Fast forward to the present
My platelets continue to be higher than ideal and with my consultant we continue to explore suitable medication options.  I’m now on a moderate dose of Interferon Alpha and my platelets are controlled without the major side effects that are often documented with this drug although at one point, eighteen months into taking this medication the dose of Interferon did make me feel fuzzy minded and overly emotional (beyond hormonal changes!), and we reduced the dosage by 60%, whilst still managing to control the platelet count.

I can’t speak more highly of the MPN team at my hospital, all of whom have been great since the first time I attended for ongoing care.  Whilst it is a busy NHS clinic, I know that when I see my consultant there I’m getting focused advice and care.

I am blessed to be mainly fit and well.  The sudden fatigue I experienced at the start of this MPN journey and which lasted for a couple of days has passed and is rare and when it was a problem, frustratingly there didn’t seem to be a pattern to what set it off.
I also had chronic back ache in the early days of diagnosis, which my consultants explained was related to the overactive bone marrow in the long bones – strong pain killers, physiotherapy, pilates and occasional alcohol did nothing to sort that.  I have since been diagnosed with a lumbar stenosis, so maybe that was an unrelated source of pain all along!

Since diagnosis I have sorted out some practical ‘life’ issues, like a will and plans for custody of the girls should the worst happen.  Having a big health scare has also put a different perspective on many issues – for example when my husband suggested a six week family holiday, whereas previously I would have worried about work, post diagnosis my attitude was ‘why-not, life can and does change anytime!’ I’m not more reckless but definitely more focused and work to live rather than live to work.

My work for MPN Voice
I am now actively involved with the MPN support group using my publishing skills on the newsletter and publicity initiatives for the charity.  I am also honoured to be the patient representative for the NCRI group of MPN haematologists who meet quarterly and work hard on behalf of MPN patients to further research and a search for a cure.  Through my contact with this group I’m so encouraged and impressed with the amazing dedication and talents of the MPN specialists who are driven to find a cure and better options for us as patients.

Looking ahead
Looking forward I know the condition could change and have to be realistic about some of the implications of living with a chronic blood cancer.  However I am determined not to let it limit me now and aim to keep as fit and healthy as possible.  One day there will be more drug options and hopefully a cure and, God willing, my MPN will be something I die with rather than from!