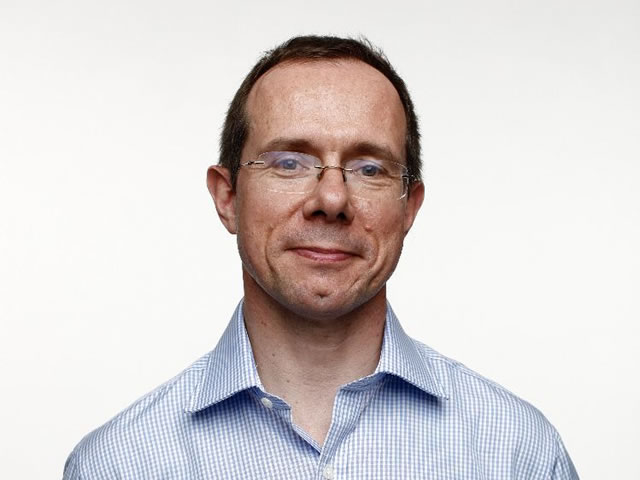 I’m a 53 year old bloke from North London and I was diagnosed with essential thrombocythaemia about 16 years ago. Under the care of my consultant, I’ve been taking interferon alpha which to date has controlled my blood counts very effectively. At this point, I have a completely normal life, whatever that means.

Numb on right side

My story starts in February 1998. Having returned from a trip to the US on a Saturday morning, on Sunday I woke with a stiff back and ran myself a hot bath. When I got out of the bath, my back felt a lot better but I noticed that I felt numb all down my right side, and I couldn’t walk properly or hold things firmly with my right hand. After half an hour, I still felt the same and went off to see the emergency GP. His assessment was, “Don’t worry, you haven’t had a stroke, but I’ll refer you to a neurologist to be on the safe side.” I remember going for a pizza with my wife Lynn and daughters afterwards and being embarrassed that I couldn’t hold the pen to sign the credit card slip at the end of the meal.

I had suffered a stroke

When I described my symptoms to my dad, coincidentally a retired doctor, he was not so laid-back, so on Monday morning I was on the phone to BUPA and by lunchtime I had an appointment with a consultant neurologist in Queens Square. I saw him the next day, and he sent me for an MRI scan, having told me that I had suffered a stroke, albeit a fairly minor one; by now most of the symptoms had faded away. The next 24 hours was the worst period of the whole story – I was petrified of what this view inside my head was going to reveal.

My worst fear – a brain tumour – was thankfully not realised, but the neurologist was right: the MRI clearly showed a golfball-sized infarct (area of damage) in my brain, the probable result of a blood clot. This gave us an explanation for my symptoms but, as yet, no known cause of the clot itself. We remained without a definite diagnosis for six weeks or so, despite what seems in retrospect like hundreds of different scans and tests. Finally one of the doctors decided that my blood counts looked a little strange and suggested I go to see Prof. ‘platelets’. Prof. P. ran some more tests and booked me in for a bone marrow biopsy (BMB) the next day.

If you’re an MPD patient and you’re reading this, the chances are that you’ve had your own BMB. I’ve had three now, and while none have been exactly pleasant experiences, they have not been particularly painful. The first I had without any sedation, but my body obviously decided that what was happening was so weird that it shut down by itself and the next thing I knew I was waking up with an oxygen mask on and the whole thing was over. For the last two BMBs I have been sedated – they give you a drug through a vein in the back of your hand, and when they’ve taken the marrow sample they give you another chemical that reverses the sedative and you wake up as if nothing has happened. If it’s offered, I would definitely recommend this way of having a BMB.

The day after the first BMB, I spent about two hours with my consultant while he patiently and clearly took me through the causes of the condition, the treatment options and, most importantly the long-term outlook. What I remember most from that meeting was the sense that, at last, we had found a definite cause of my stroke – that in itself was a major relief – I was getting increasing uncomfortable with the attitude of “oh well, it was only a minor stroke – just one of those things that happens”. At least now there was a logical, understandable reason why it happened. The other thing I remember was the feeling that the consultant and I were going to decide together what the right treatment was – he encouraged me to read up about ET on the internet, and suggested that when I came back next time, to come with my wife and talk through the decision together. I’m glad my consultant suggested this – Lynn reminded me the other day that I became very wrapped up in my own thoughts during this period and almost shut her out of the process. I don’t think this was a conscious decision on my part, but I think we both benefited from discussing the diagnosis and treatments with the experts. Lynn pointed out to me that my stroke and the subsequent diagnosis was a very traumatic experience for her and other members of my family and it helped to share our thoughts about it.

Even though I was seriously nervous about the idea of giving myself injections, interferon sounded like the best choice. We also talked about anagrelide and hydroxyurea, but the side effects didn’t sound very nice. Above all, with interferon, my consultant said there was the potential for a period of remission, during which I might be able to come off the drugs altogether. He made it clear that what I had was a chronic illness – in other words there was no known permanent ‘cure’, but that with effective treatment and no further complications I could expect a normal lifespan.

At that time, Schering-Plough, one of the companies that make interferon, ran a scheme whereby a nurse would visit new patients at home to help them get started with the injections. So a very nice lady turned up one evening and showed me how it all worked. (Back then, the drug came in individual miniature syringes with normal needles. Nowadays we use a ‘pen’ device like diabetics use for insulin – these have really tiny needles that are virtually painless). She showed me how to find a suitable part of the body to use – being a middle-aged man, I’m perfectly evolved for giving myself subcutaneous injections – I have a handy roll of fat around my middle that’s just ideal! The nurse gave me my first shot, and explained that I would probably wake up the next morning feeling like I had a very bad cold or flu – achy and shivery. She said that paracetemol was effective against these side-effects, and by taking the interferon in the evening, hopefully you can sleep through the side effects. I actually woke up about 4am the next morning, feeling exactly as she had predicted, but the paracetemol worked a treat. Nowadays, I take a couple of tablets (ibuprofen works well too) at the same time that I inject and I rarely have any reaction – sometimes if I happen to actually have a cold, I feel a bit of extra grogginess in the morning, but that may be due to the fact that it’s usually a Monday morning!

Apparently, different patients have differing tolerances to the drug, but overall, if you’re considering interferon and either its side effects or the idea of the injections is worrying you, give it a try – I didn’t fancy it much, but it has turned out fine.

Within a few months, my counts were normal, and they’ve stayed that way. Over time we’ve gradually reduced the interferon dose, always in discussion with either my consultant. I now seem to be in a ‘plateau’, the hoped-for period of ‘remission’ – I continue to take a very small dose, but my counts are stable. Personally, I prefer to continue like this, rather than stop taking interferon altogether. Maybe that’s because I don’t want to fall into the trap of thinking that I’m cured because I don’t take the drugs anymore.

A year or so after being diagnosed, and starting the interferon treatment, I went through a period of having very itchy skin – a complaint that many MPN patients suffer from. In my case, the sensation was less like a gnat bite itch, more like an overall prickly feeling – I’d get it on my legs, arms, stomach, etc. For a while I just tried to put up with it, but occasionally the attacks were very hard to deal with – it’s hard to explain a sensation that isn’t actually painful but is nevertheless close to unbearable. One thing I noticed, though, was that the itching improved noticeably after a summer holiday. I talked to the doctors about this and they suggested I try spending time under a sunlamp to see if that improved matters. They referred me to the dermatology department of my hospital, where I tried a UV light treatment. I think it did make a difference, but after a discussion with one of the specialists there, I tried using a different soap and shampoo instead of the light treatment. This approach was very effective, and since then I have had virtually no recurrence of the itching attacks. I would recommend any MPD patient suffering from itching to try it – the shampoo is called Polytar and the soap is E45 Emollient Cleanser.

I still occasionally suffer from itching, but another trick that seems to work is to make sure I dry off quickly and wrap up warm as soon as I get out of the shower – in my case, the itching is often triggered by rapid cooling of the skin and preventing that seems to work.

I continue to go to the MPN clinic every two or three months – I actually find going to clinic to be a reassuring experience, especially because of the personal care the doctors at my hospital provide. For me the knowledge that there are knowledgeable and friendly professionals there who know all about me and my illness is a great source of comfort.

I know it sounds strange, but I feel as though I’ve very lucky – it was fortunate that the original stroke didn’t disable me more permanently; it was pure coincidence that I was referred immediately to Dr P., and I’m lucky that I’ve tolerated and responded well to the interferon treatment. But of course, mine, like most others, is a continuing story – my stable period won’t last forever, but hopefully we’ll be able to deal with whatever comes along next.