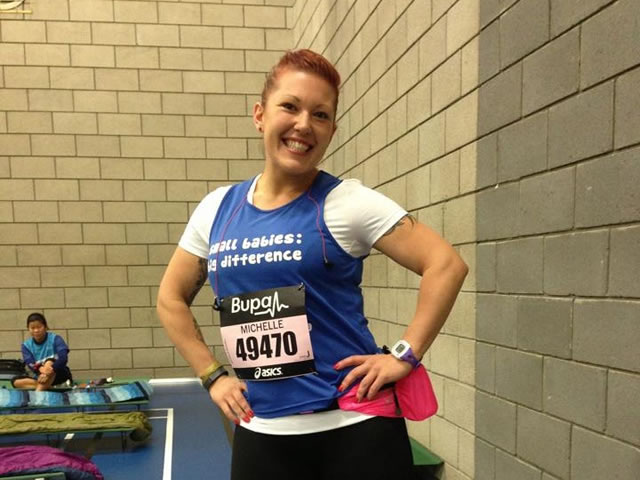 October 2013 I was the fittest I had ever been, 10K’s under my belt along with a half marathon and the GreatSouth Run. I felt a little poorly the morning of my last run however I put it down to nerves. I started the race well, set out fast pushing myself harder than I had before. 3-4 miles in and my tummy was really not happy, I didn’t think I was going to make it to the finish line. Thankfully I did and made it in a good time too. The rest of that day I didn’t eat but couldn’t get enough water into me. Monday and Tuesday were a total write off, I slept, never moved from my bed except to pop to the bathroom or get a glass of water.

On Wednesday I turned up at work and was sent straight to my doctors, although I felt better; apparently I didn’t look it. The doc sent me for an ultrasound, thinking I may have kidney stones, but had essentially signed me off for gastric flu and to return in two weeks for the results. The ultrasound showed cirrhotic lesions on my liver and a portal blockage. I was immediately admitted to hospital. Well cutting a far too long story short, I was discharged three weeks later after an abundance of tests. I had Liver Cirrhosis, Portal Vein Thrombosis with a chance of the lesions on my liver being HCC. (Hepatucellar Carcinoma). Thankfully so far that is not the case and I thought along with the rest of my family that was that there would be no more surprises…..how wrong could I be?

In Jan 2014 I saw the Haematology team in Guys hospital who set about doing several blood tests. To be honest I didn’t think anything more about it but two weeks later and I was informed that I had a Myeloproliforative Neoplasm; as if my world hadn’t been turned upside down enough! A bone marrow aspiration showed Polycthemia Vera with some Myelofibrosis. I’d dodged one cancer but not another.

When you meet me I look fine and I feel most days fine. The only give away that there is something wrong is when I have to take tablets. Like with all situations I have bad days, I am tired, I don’t want to get out of bed, I don’t want to talk to people and I don’t want to go to work, but I do. I shan’t mope about things I can’t control because I can take measures that make me feel better. I drink a minimum of three litres of water a day; I do a minimum of 30 minutes of exercise a day. The exercise isn’t easy; in fact it’s frustrating, especially when I was so active. I plan on resuming ‘competitive’ running at the end of October. I need something to focus on other than, what could go wrong next.

My skin itches, not every day or always after a bath or shower, so I wash with oil based shower gels and moisturise 2/3 times a day. It doesn’t solve every case but I have good skin…silver linings and all!

I am 33 years old, I have a career, a wonderful boyfriend a beautiful 10 year old step-daughter and an amazing supportive family. My life has been challenging to say the least especially during the 10 months of diagnosis, but everyday I wake up grateful. Things could be worse for me and one day they may be, but right now, I have a life to live.