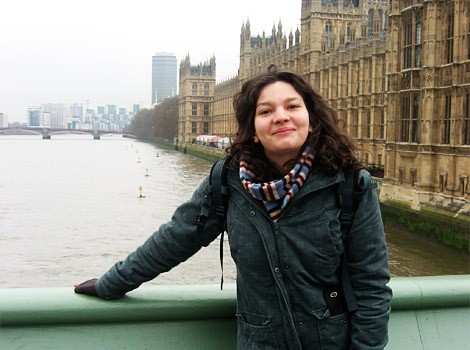 My name is Gina and I have essential thrombocythaemia (ET). I am one of the rare people to be diagnosed with a myeloproliferative neoplasm (MPN) as a child: I was diagnosed at the age of twelve. Today I’ve completed undergraduate and graduate degrees in the disability sector. I lead a busy and active life working with disabled people.

Me in my cultural context

I came to be diagnosed with ET through a coincidence – it was something of a twist of fate. I was born in Athens. Greek families tend to be very protective of their children – and my mother had more worries than most. My sister was anaemic as a child and needed to have her blood tested quite often. When my mother took my sister to the hospital for her tests she always brought me along as well. I saw my sister’s blood tests as a good way for me to escape from school for a few hours. I had no sense that there was anything wrong with me.

On one of these visits I had a blood test as well, and strangely the results came back showing that I had too many platelets. The microbiologist who checked my results suggested that I be re-tested to make sure. Several blood tests followed, but my platelet count was always the same – over 1500.

I wasn’t too worried. I was just twelve years old and I could not understand what all this was about. My parents spoke with my doctors, but they had difficulty obtaining an understandable explanation of why I had this disorder and what the implications might be.

My experiences during those early years with an MPN took place within a certain cultural and societal context. In Greece, family has a central role in society. Parents tend to protect their children, wrapping their offspring in cotton wool and providing every kind of support throughout their lives – physical, emotional and financial. My family is small, but we have strong, close relationships with one another.

I started to feel worried

After my high platelet count was discovered,  for a time I continued to visit my local doctors, but at a certain point my doctors and my parents decided that the most suitable place to treat me was the haematology-oncology department of a children’s hospital in Athens. At the hospital, I sat in the waiting room together with children suffering from leukaemia. It was at that point that I began to feel worried that something serious was definitely wrong with me. When I missed days from school my parents would tell me, “It’s because you have too many platelets.”

Even if it’s not such a long time ago, I find it hard to recall how it was living with ET as a child. I sometimes think that my poor memory of this time in my life is a mechanism that I have developed to protect myself, which may be why I have very selective memories from this period. I remember being a very active and sociable kid. I played basketball with my friends, cycled, swam, climbed up trees. I was just a normal, playful child. Then my doctors started setting limits in my life. I had to try not to hurt myself while playing. I was told to be more careful, not to run too much, to drink water constantly, eat carefully and to follow many strict rules.

I can remember the experience of a bone marrow biopsy – done without anaesthesia in a day unit because there were no rooms vacant. I vividly recall insisting on another occasion that I not be given full anaesthesia because I did not want to have to stay in the hospital while I recovered. Even now I feel depressed if I have to stay in a hospital overnight.

Searching out doctors in the UK

My parents, both well educated, began to do some research, and they concluded that the Greek health system could not provide the care that I required. My parents were unable to find any haematologists in Greece with an expertise in MPNs, so they decided to look for specialists abroad. When my parents told me that we might visit a hospital in England I was a bit scared but also quite happy to travel to another country for the first time. I remember how my parents acted when we first planned to visit doctors in London. They talked it up as a wonderful holiday, during which we would just have to spend a few hours seeing doctors.

Taking interferon as a teenager

I was treated with anagrelide at first, and I began treatment with interferon injections when I was sixteen, just I was preparing to sit the national exams to enter university. The Greek educational system is very competitive. I came home from school late every night and then had to do my injection. Exactly five hours after I had my medicine the side-effects would kick in and wake me during the night – fever, shaking and severe pain in the legs. With side-effects and school pressure I found it difficult to cope, but I just had to handle it.

I can offer some advice to the parents of a child with an MPN: let your child know that being different is not bad. They must find the way to live with what they have. I’ve found it very helpful to share my feelings with family and friends and to have their support. Talking things through is important during those times when you feel that what is happening to you is unfair. I also believe that anyone with an MPN should just try to live as normal a life as possible. Your condition may throw barriers into your life – but you don’t need to overestimate the impact of these obstacles. Consider instead how you might overcome these barriers and use them in a constructive way to accomplish your dreams.

My feet are on the ground

I’m now an adult with an MPN and I lead as normal a life as possible. I don’t feel my disorder affects my relationships with those close to me, nor has it altered my plans and dreams. I want to travel around the world conducting research to help people with disabilities who live in institutions. My dream is to close down institutions so that everyone can be included in the community.

I am convinced that my own health condition has influenced my aspirations. Having an MPN has helped me keep my feet on the ground, even given me an asset. My experiences have led me to choose a career in working with people with disabilities. Living with ET as a child has given me a deep understanding of people facing disabilities. As an adult I can handle my own feelings, and this strength enables me to help others. I am an empathetic person, but I don’t feel pity for people who face severe difficulties. My work in the disability sector has led me to understand that there is a distinction between impairment, an attribute of the individual body or mind, and disability, a relationship between a person with impairment and society. I believe the same model can be used in thinking about long-term health conditions such as mine.

I won’t allow my impairment to turn into disability. And I hope you won’t allow yours to either.