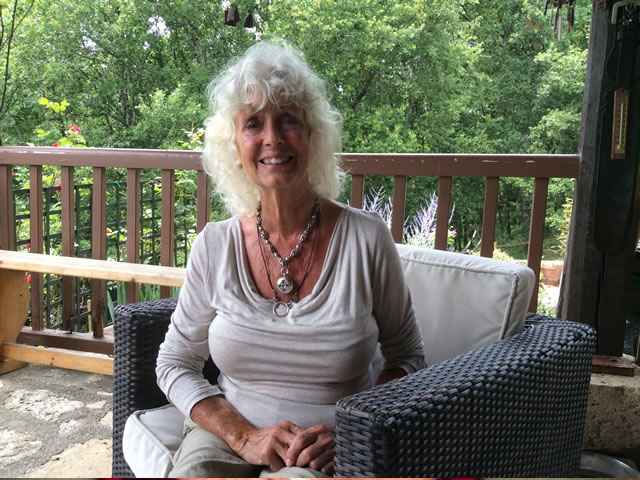 Sally writes I had no serious illness before PV. I was asthmatic but well controlled with Milflonil and it never stopped my very active life, breeding, competing at top level with horses and ponies , and being a busy professional artist and sculptor.

Diagnosis in 2010 was a life changing shock. That same year I had been unusually tired, red sore itchy eyes and patches on my face. I saw a G P in who said” at my age was trying to do too much”! On return to our French house I began to be breathless(not asthma) with heavy painful legs and chest and chronic fatigue. I saw a local Medicine General who hospitalised me immediately. There I was tested for heart, E C G s scans, etc, and it was impossible to take blood it was so thick and my haematocrit was at more than 80. The consultant told me I was lucky to be alive! Eventually venesections were done, which were very traumatic at first due to the thickness of my blood. Several weeks later when I got down to 48-50ish I was prescribed daily hydroxycarbamide and Kardegic.

I felt dreadful; nauseous, and depressed at my useless state. In Jan 2011 I awoke to pain in my chest, and admitted as an emergency to hospital. An artery had collapsed , so I had to have an operation for a stent.

That required taking Plavix for a year but I am now only on Isoptine and all is well with that. After my release from hospital I returned home and again I was depressed and afraid and still nauseous, often vomiting. I was referred to a hospital psychiatrist and she was a great help talking me through my fears, prescribing an anti depressant for a short time. I began to pick up and work in my studio again even doing exhibitions and shows. I have never regained my former energy and can only work intermittently as fatigue is constant. I walk with my dogs every day in the lanes and open country. I always feel better afterwards, even on the frequent “tired” days, when to get motivated is hard. The breathlessness is still there and it doesn’t get better or worse with exercise.

I had an MRI scan in 2013 and no problems showed in lungs ,heart or arteries.

The heat makes me feel awful so I only have sun in the mornings for my low Vitamin D and the rest of time I keep cool. I have massage from a lady who specialises in working with cancer patients and find it a help for the aches and pains that appear and for stress and breathing. I use lots of moisturiser E 45 or similar and find pure Argan oil very good for dry red patches peeling nails and conditioning for my hair. My weight stays at 50 kilos which is my normal weight as I’m 5 ft 4inch in height. I drink lots of water no alcohol, red meat or any rich cakes etc. and I eat fish ,chicken, salads and veg which gets boring but I think it has improved me overall.

4yrs on I have monthly blood tests, a full MOT with a doctor and I see my consultant every 6mnths, and the latter will call me at home if any change is needed in my meds.

The only one big blip to speak of was when hydroxycarbamide caused a dramatic drop in white cells which meant that I needed to stop my medication for 2 months.

I am now fairly stable alternating daily dosage of hydroxycarbamide and so on .

This has been my P V journey, I hope there is something within to help research and for other MPD sufferers.

Will
December 9, 2015
Living With MPNs
Recent Posts
Go to Top