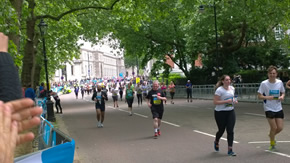 Gerry Burns was diagnosed with PV in 2006 and was 53 when he did the run. He writes ‘I was going to do something for Cancer Research as Loretta, my sister, was being treated for lung cancer. I am happy to say she is still with us and very much improved from the end of 2013. However, there are a few well known cancers which attract donations from all over and there is plenty of research going on relating to them. MPN is even closer to home and it has realistic modest targets of what the money raised will actually be used for. With encouragement from Loretta I decided to do the BUPA London 10k run for MPN Voice.

Part of the MPN Voice running team who raised over £12,000