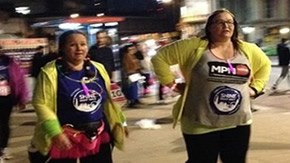 Karen, who has PV, is a frequent MPN Voice supporter and fundraiser. As part of her get fitter campaign she has been training hard since April, putting on her trainers, pounding the streets in her MPN Voice T Shirt, raising awareness and doing some serious training for the Shine Walk.

Karen raised £855 with her Shine Walk and recently another £109 in the September Blood Cancer Awareness month.

Andrea Headech is a regular fundraising supporter for MPN Voice. Recently she took part in a 5K obstacle run and raised £600 for us.