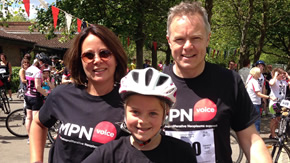 Ruby’s Auntie Rachael has essential thrombocythaemia(ET) and Ruby wanted to do something to show her support and decided to do a bike ride to raise funds for MPN Voice.

Ruby and her father Peter rode the 25 mile LIDBA bike ride through the Hampshire lanes, starting and finishing at Liphook which took 1 hours and 50 minutes. Ruby and Peter were waved in by family and friends with our MPN Voice balloons and flags and raised £400