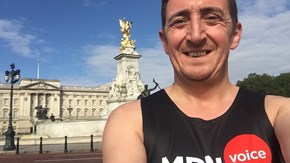 “Hello, my name is James and I live in Winchester with my beautiful wife Sarah, who is just about to have our first baby….. middle of April!!! So no pressure then!!! I’m either going to be running on Sunday 24th April really fast, because our baby is late and just in case… I need to get back home quickly!!! Or I’m going to be running on Sunday 24th really slowly, because we have a beautiful baby, that doesn’t realise that dad needs some sleep!! Sarah has been amazing and has said she still wants me to run for MPN Voice no matter what!!!

My training has been a bit tough, as I injured myself late last year, so I’ve lost some valuable training miles, but I know I will get around no matter what, with my family and friends cheering me on!

I am running to support MPN Voice for my Aunt who has Essential Thrombocythaemia. I know how much she depends on MPN Voice for information and support. I also know how excited she is about the research that MPN Voice is funding.

Another reason to do the Marathon for MPN Voice is to raise awareness. MPNs are so rare that unless you have a friend or someone in your family that has an MPN you would never know about these rare blood cancers. So I have been wearing my MPN Voice running vest with pride, helping to raise awareness for MPN Voice. I did get a few strange looks when I was taking pictures of myself all over London, wearing my running vest…. Especially as it was really cold!!!”

If you would like to sponsor James, his Just Giving Page will be added shortly.