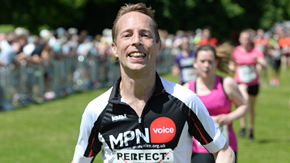 John was diagnosed with ET in 2011 and decided in 2014 to try and get more active by training for The St Albans Half Marathon which he completed last June. Never one to do things by halves, when he heard that there was an opportunity to enter the London Marathon and support MPN Voice he kept on putting one foot in front of the other to train for the big event in April 2015 with some expert help from his local running club Ware Joggers.

John says ‘getting more active is great for your morale and self-esteem. I would urge any sufferers of MPNs to try and be a bit more active if they can.” Adding ‘the inevitable seasonal bugs can really knock the stuffing out of me and I did get a bit anxious about keeping up with the training schedule.’