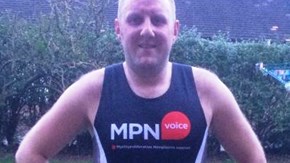 “After my fiancé Lauren was diagnosed with Essential Thrombocythaemia in January 2014 at the age of 28, she went to MPN Voice for support and guidance. I was amazed and humbled by the support she received from you forums, especially after attending a patient group forum in London last year.
She has struggled to come to terms with her diagnosis and I don’t think without the support of MPN Voice, she would be as settled or as happy as she is today. Recently she has found the confidence to write a blog about her illness, which she hopes will help others with MPNs. The blog has been read by people all over the world and has had lots of positive feedback!

Oh behalf of myself, Lauren and our family I would like to give back to the the Charity, MPN Voice, which has helped us overcome so much over the past few years.

I now am part of the MPN Voice London Marathon 2016 Team, a charity so dear to my heart. I am challenging myself to make Lauren proud!”

If you would like to sponsor Trevor, please go to his Just Giving Page